Home > News > Environmental and scientific news > Understanding and fighting the impacts of global warming through knowledge (...)

IRD and the University of Yaoundé 1 have been conducting research on the biodiversity of fish that inhabit Cameroon’s forest brooks for about ten years. Still little known, this fauna, often beautifully colored, is threatened every day by deforestation and by the use of pesticides for agriculture. Recently, researchers have highlighted another danger for some species, global warming.

Indeed, by observing more than a thousand streams, the researchers realized that the presence or absence of species in these environments was dependent on the average temperature of the water. Some species support high temperatures (25 to 30 ° C), they can be found at low altitudes as on the littoral plateau for example (Douala Kribi Campo). Other species need more "freshness" and are only found at 400 meters altitude (Yaoundé, Eseka, Foumban). The species of these two groups compete when they meet and it is then the average temperature of the water that decides who will be the winner and will occupy the creek.

In a context of climate change, the rise of 2 or 3 degrees of temperature will have important consequences on the distribution of the species and will certainly see the species on the littoral shelf replace the species higher altitude which will find themselves in difficult situation or even will disappear. 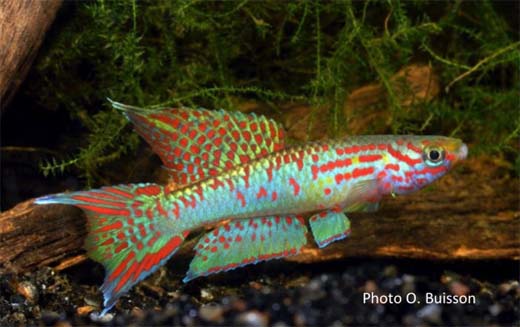 It is to try to better understand this phenomenon, that Jean-François Agnèse, IRD researcher at the Institute of Evolution Sciences of Montpellier (ISEM) came on a long-term mission (2 months) in Cameroon. With his partners, including A. Pariselle, an IRD researcher from ISEM in Cameroon, F. Messu (ENS Yaoundé who has just supported his thesis on the subject) and C. Bilong Bilong, professor at the University of Yaoundé 1, he has undertaken field research in order to better understand the temperature adaptation mechanisms of these species in order to be able to predict the impacts of global warming and to be able to mitigate their effects.

Having demonstrated recently that these differences in ability to withstand high (or cold) temperatures stemmed from different metabolic capacity, researchers now want to identify the biochemical mechanisms involved. More generally, this work could lead to a better knowledge of how cold-blooded animals, fish, batrachians, but also insects, adapt to the temperature of their environment.