Tribute to victims of the attack in Paris

France has suffered Friday at Saint-Denis and Paris, a cowardly aggression and a total barbarism of an unprecedented magnitude. In homage to the victims of the November 13, a remembrance ceremony was held this Monday lunchtime in France and in all French establishments abroad. At the residence of France in Yaoundé, the ceremony was attended by the Cameroonian authorities, the diplomatic corps, members of the French community and the embassy staff. 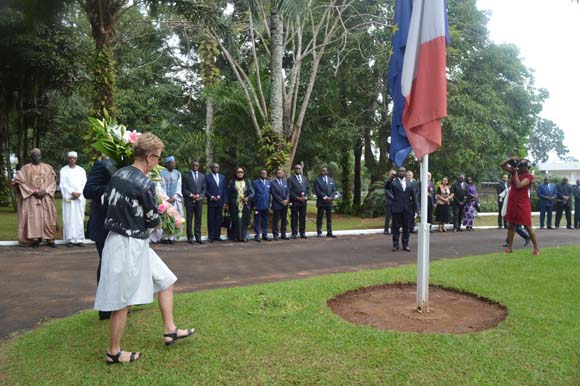 Mr. Joseph Dion Ngute, Minister Delegate to the Minister of Foreign Affairs signed the condolence book for the government, in the presence of many other ministers who thus expressed their solidarity with the victims of the attacks of November 13. While it identifies nineteen nationalities among the dead and wounded, many ambassadors and other members of the diplomatic corps also expressed their compassion. Compatriots, some of whom have lost loved ones in the attacks, were also present.

Madam the Ambassador introduced the ceremony by recalling that France and Cameroon were facing the same scourge of terrorism, against which they had to remain united. After a minute of silence and the performance of the national anthem, each participant was asked to lay a flower in front of the flags at half mast, before being offered the opportunity to write a word of support in the book of condolence. The condolence book at the embassy remains open until 17 November from 9:30 to 12:30 in the morning and from 2:30 p.m. to 5:30 p.m in the afternoon. 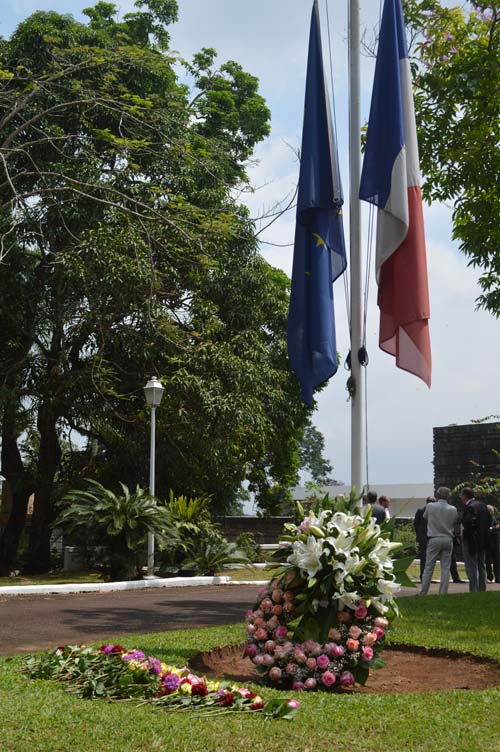 A moment of silence was held simultaneously in all the French network in Cameroon, particularly at the General Consulate of France in Douala, in schools : Fustel de Coulanges and Dominic Savio and in the two sites of the French Institute in Cameroon . The 15, 16 and 17 November are days of national mourning and flags are at half-mast in all our ROW across the world.