Home > News > Franco-Cameroonian News > The Ambassador of France to Cameroon visit’s the North of the (...)

The ambassador of France to Cameroon, H.E. Mrs. Christine ROBICHON has performed from the 1st to the 5th of June 2015, a mission in the North. She stayed for in Ngaoundere in the Adamawa region, Garoua in the North and Maroua in the Far North to reaffirm the support of France in the fields of security, development and humanitarian response in the Grand Northern Cameroon.

In N’Gaoundere, She visited the university and participated in the launching ceremony of the health check (in french "chèque-santé"), in the presence of the Minister of Public Health, Andre Mama Fouda. This initiative aims to contribute to improving maternal and neonatal health in several pilot health districts across the north and is funded by the French Development Agency (AFD) to the tune of 23 billion CFA francs and by the German cooperation. By purchasing a health-check of 6000 FCFA representing 10% of the average cost of care related to pregnancy and childbirth, pregnant women will benefit of prenatal and requisite medical examinations, births attended by trained staff, followed by the mother’s and baby health care until 6 weeks after delivery.

In the northern region, the ambassador of France in Cameroon inaugurated at the French Alliance of Garoua, the photo exhibition "34 Wonders of the World." This traveling exhibition dedicated to the conservation of biodiversity is scattered throughout the country in partnership with the French Institute of Cameroon. It highlights the most beautiful natural sites in the world which are very rich ecosystems but also very threatened. This initiative will help to better measure the challenges of Climate Conference (COP21) which will held in Paris in December.

Her visit in Garoua has also enabled the launch of the initiative Health-check (chèque-santé) in the northern region. The involvement of France in the area of ​​health is also illustrated by the opening of the boarding of Midwives of Private School of Nursing in Garoua (EPIG). The objective of this establishment, opened in 2011 by the Ministry of Public Health of Cameroon, is to train qualified personnel in the health field.

In the Far North region, she visited the refugee camp of Minawao alongside the Secretary of State of Public Health in charge of the management of epidemics and pandemics, Mr. Alim Hayatou. France provided 900 million FCFA to the United Nations High Commissioner for Refugees (UNHCR) in the 1st half of 2015 to help the country cope with the influx of Central African and Nigerian refugees. The Ambassador expressed the solidarity of France to Cameroonian authorities that host many Nigerian refugees receding the violence of Boko Haram. She talk with Col. Kodji, commander of the 4th inter-army military region, to which is assigned a liaison detachment composed of two French officers in charge of such intelligence sharing with the countries involved in the fight against Boko Haram. 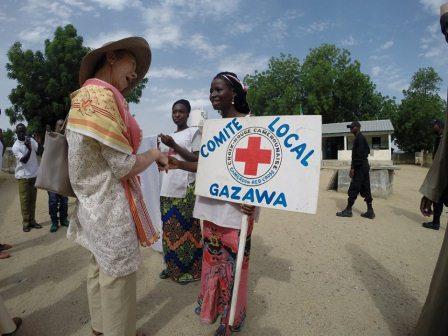 The Ambassador also went to the meeting of Cameroonian women and children displaced by the violence of Boko Haram and supported by the Red Cross at Gazawa malnutrition treatment center. The victims of the humanitarian crisis linked to Boko Haram are supported by France through donations to the Cameroon Red Cross, to the International Committee of the Red Cross (ICRC) and to the World Food Programme for a total amount of 917 million FCFA, which allow including the distribution of food and seeds to dispaced people and host populations. During his visit to Maroua, the Ambassador also met the speakers of the ICRC delegation and humanitarians working with the United Nations.

Read the various speeches made by the Ambassador during this trip: