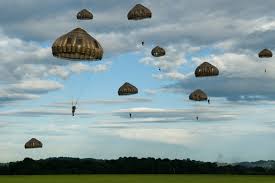 Yaounde the 1st of June 2016 | An operational training detachment composed of six French soldiers - officers, non-commissioned officers and other ranks - is present in Cameroon to provide a set of training the Cameroonian Parachute Battalion. These trainings, conducted within the framework of the Agreement of 21 May 2009 establishing a defense partnership between Cameroon and France, are conducted in Koutaba from May 26 to June 12 in order to update the skills of parachuting monitors for future promotions Parachute patented. The Embassy of France takes this opportunity to reaffirm its support to Cameroon in the fight against terrorism and to salute the courage and determination of the Cameroonian armed forces engaged in this fight.