Nearly a third of vascular plant species in tropical Africa may be at risk of extinction, according to an international study published on November 20, 2019 and coordinated by the Institute of Research for Development , in partnership with the University of Yaoundé 1 and the Ecole normale supérieure of Cameroon. 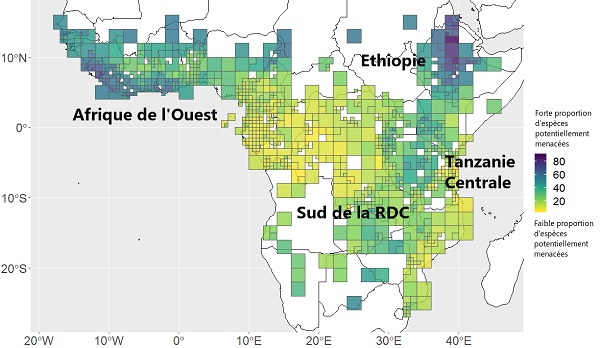 In the face of climate change, the preservation of biodiversity is a major challenge. However, while the conservation status of most vertebrate species has been assessed, this is not the case for plants, despite their crucial importance for terrestrial ecosystems. This is particularly true in the tropics, where the flora is very diverse and poorly documented.

That is why an international study, coordinated by a researcher of the Institute of research for the development (IRD) in partnership in particular with the University of Yaoundé 1 and the Ecole normale supérieure du Cameroun, has just been published on November 20, 2019. It reveals that nearly one third (31.7%) of the 22 036 species of vascular plants studied are "potentially threatened with extinction", and that 33.2% of the species are "potentially rare", and could be threatened in the near future.

Threatened species include Polystachya lejolyana, an orchid species found in Cameroon and Gabon, and Sericanthe lowryana, a species of Rubiaceae from Cameroon. The Far North of Cameroon is particularly concerned.

"These results were possible because the partners involved agreed to share their data," says Bonaventure Sonke, professor at the Laboratory of Systematic Botany and Ecology of the Ecole Normale Supérieure (University Yaounde 1). "This is a strong signal for researchers to share their data, in order to get results on a larger scale".

Read the press release in its entirety