The Ambassador of France in Cameroon undertook a mission from August 2nd to 4th, 2016, in the Far North region of Cameroon -an area strongly hit by the conflict against Boko Haram. The main objective was to reaffirm the support of France in the fight against Boko Haram and its solidarity with the local victims of the humanitarian crisis caused by terrorism.

The French Ambassador undertook a mission from August 2nd to August 4th, 2016, in the Far North region of Cameroon -an area strongly hit by the conflict against Boko Haram. She received logistical support from the World Food Programme (WFP) and close protection by the Groupement Polyvalent d’Intervention de la Gendarmerie Nationale (GPIGN) and a unit of the Rapid Intervention Brigade (BIR). The main objective was to reaffirm the support of France in the fight against Boko Haram and its solidarity with the local victims of the humanitarian crisis caused by terrorism. Through meetings, in Maroua with the Governor and with humanitarian actors and Mora with the Prefect, the Ambassador was better informed of the evolution of the security and humanitarian situation, as well as of the development projects produced by the government for the region. In Moutourwa, Tokombéré, Mora and Maroua, she visited sites of activities benefiting from financial contributions from France (French government grants or funds through the C2D program by the French Agency of Development): food distributions by the WFP to displaced persons who fled the villages subjected to the violence of Boko Haram, now down to Kolofata and Mora; treatment of malnourished children by the NGO Action Against Hunger in the district of Tokombéré; monitoring of pregnant women through the "health care voucher" in Maroua; rural development and youth employment through work-intensive labor conducted under the National Program for Participatory Development (PNDP). 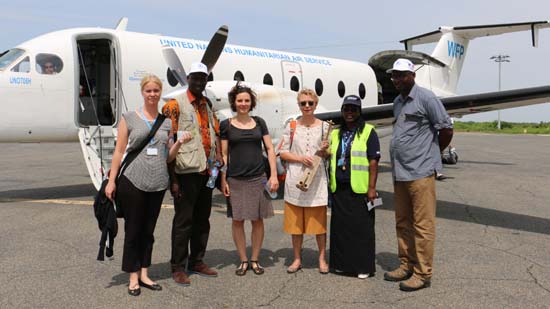 Detailed description of the mission :

On August 2nd, the Ambassador was received by local authorities, particularly the Governor of the Far North region, Mr Bakari Midjiyawa and the Government Delegate of the Urban Community of Maroua, Robert Bakari. On this occasion, the Ambassador announced that Maroua was jointly elected by France and the Cameroonian government to benefit from the Regional Capitals project which is partly financed through the third C2D (Contract of Debt Reduction and Development). She also visited the office of the City Hall in charge of civil status.

Interviews with the Governor of the Far North region, Mr Bakari Midjiyawa and the Government Delegate of the Urban Community of Maroua, Robert Bakari.

Ambassador Robichon took the track connecting the villages of Mougoudou and Damai in the town of Moutourwa ; this road was the subject of rehabilitation work with high-intensity labor (LI) that employed many young people. This project, implemented by the National Program for Participatory Development (PNDP) within the framework of the second C2D, now allows this road to be usable even during rainy season. Similar works and constructions of small municipal infrastructure are currently being carried out in the Far North region as part of the trial phase. By the end of 2016, the project will be expanded to 47 towns in the Far North region, with a grant from Trust Fund Emergency EU . 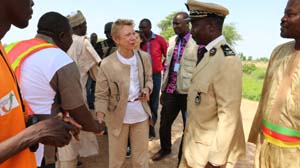 Young people who have received the Ambassador expressed their satisfaction for having had an opportunity to earn a salary - 30% of which is saved automatically through a partnership with a micro-finance institution, Crédit du Sahel. With these savings, they have been able to develop income-generating activities such as buying livestock or renovating their homes.

On August 3rd, the mission visited two sites of the World Food Programme in Mora - one site for food distribution in kind for internally displaced people, who came that day to Kolofata, and one distribution site using the "Cash -Based Transfer" system. This system has been tried out for the first time in Cameroon, thanks to a grant from France, and is implemented by the NGO Plan Cameroon. The idea is simple : through a phone ( provided by the WFP) , the WFP allocates a certain monetary amount per month and per family that allows recipients to buy food from trading partners and to pay them by a simple phone transfer. In Cameroon, 17% of the WFP food distributions through this means. This system has the advantage of letting beneficiaries independently manage their budgets and avoid mass gatherings, which have often been targeted by Boko Haram attacks in recent years.

The Ambassador then visited the Tokombéré hospital and its nutrition department (Internal Therapeutic Nutrition Center) and the integrated health center in Mada Kolkoch, where the Action Against Hunger NGO runs a project that seeks to improve treatment of severe malnutrition, affecting children within populations of the health district of Tokombéré, whether they are Nigerian refugees, Internally Displaced People (IDPs) or the hosting populations.

In Maroua, the Ambassador met with local officials of various UN agencies and twenty representatives of international humanitarian NGOs and of the Red-Cross Movement for discussions on the humanitarian situation in the Far North region and the challenges they encounter.

On August 4th, the Ambassador visited the integrated health center of Doualaré, where the "health care voucher" is used. Funded by the Government of Cameroon, by France (via the French Development Agency (AFD) and by Germany (GIZ), and launched northward in June 2015, the health care voucher aims at reducing maternal and neonatal mortality through the implementation of a subsidy mechanism, which allows pregnant women to be monitored all throughout her pregnancy, to have a safe delivery and to benefit from postnatal care. The expecting mother pays 6,000 CFA Francs and receives a paper in return, the health care voucher, subdivided into several coupons that match the care to which they are entitled, without any additional payment. The Ambassador met with the center’s staff as well as with mothers or expecting mothers who are recipients of the program. She was informed of the difficulties of some health centers to implement the health care voucher, due to the lack of qualified personnel. During the visit, she emphasized the crucial importance of quickly providing newborns with birth certificates to the staff and to the mothers. 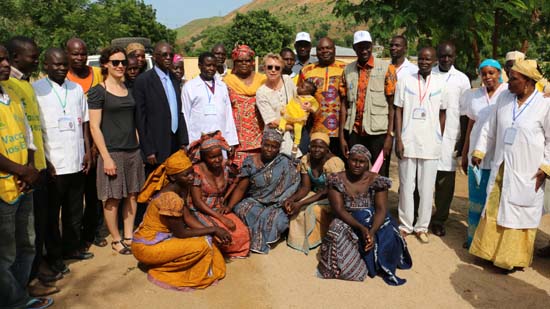 After meeting with the staff in charge of the health care voucher, with some beneficiaries

French contributions to humanitarian action in Cameroon in order to meet the needs brought about by Boko Haram and the Central African Republic crisis : 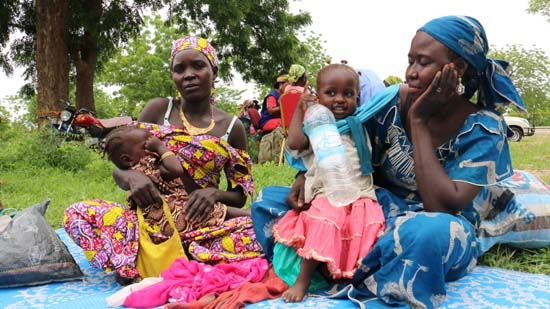