Home > News > Embassy news > Gift of Medals of knights of Arts and Letters to three Cameroonian (...)

The ceremony of the gift of insignia of Knight of Arts and Letters was held Thursday, January 29, 2015 at the Embassy of France in Cameroon, in the presence of the Minister of Arts and Culture, Ms. Ama Tutu Muna, the Minister of Labour, Mr. Grégoire Owona, the Minister of Small and Medium Enterprises, social Economy and Handicrafts, Laurent Serge Etoundi Ngoa and the General Secretary of the Prime Ministry, Mr. Louis-Paul Motazé. 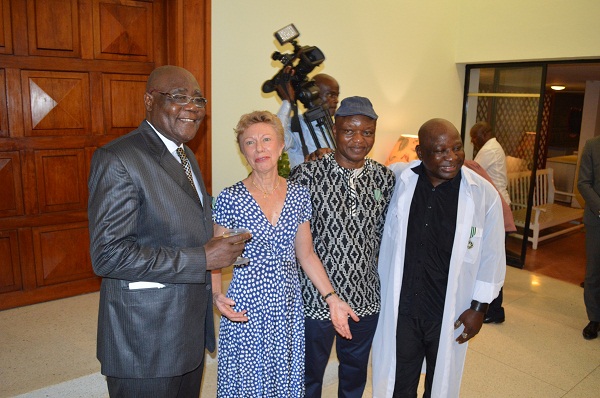 Bassek Ba Kobhio, Ambroise MBIA, TOGUO Barthelemy, were awarded in recognition of their outstanding contribution to the Cameroonian arts and letters , but also to the cultural dialogue between France and Cameroon. Their families and friends have contributed to make the ceremony warm and friendly . Two works of the committed artist Toguo were exhibited in the reception room of the residence of France. The filmmaker Bassek Ba Kobhio expressed his sincere gratitude by highlighting that he was not in the position of "old negro" Meka receiving an insignificant medal as in the novel of Ferdinand Oyono. The actor and director Ambroise Mbia received his medal as the "second courronnement" a rich career started at the Odeon Theatre in France.