France is involved in the security of the Gulf of Guinea 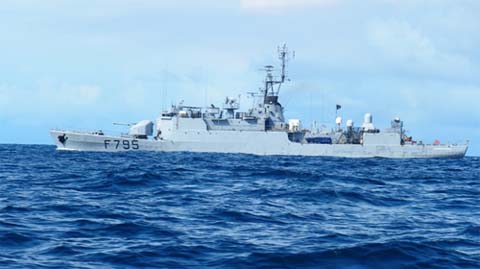 "As part of the ’Corymbe’ task performed by the French navy in the Gulf of Guinea, the ocean patrol, Ducuing Commander, will conduct a call at the port of Douala from Tuesday 20 to Monday, September 26, 2016.

On the occasion of this stop of 6 days, the crew will realized at the benefit of Cameroonian sailors, an operational training and a sea incumbent upon departure. Trade and sports events will also be scheduled. A reception will be organized by the General Consul of France in Douala.

Armed by the French Navy, the ’Corymbe’ Mission ensures the permanent presence of a building in the Gulf of Guinea and participate to securing international waters and to fight against piracy and maritime robbery in connection with the navies of countries residents. In this context, every year, between four and five of French buildings stops at the port of Douala .

The mission contributes to the French support plan for securing maritime areas in the Gulf of Guinea and the European strategy for the Gulf of Guinea. France in particular supports the Interregional Centre of Cooperation (CIC) for safety and maritime security, inaugurated in September 2014 in Yaoundé, which is the centerpiece of the fight plan against piracy implemented by the countries of the Gulf of Guinea . "