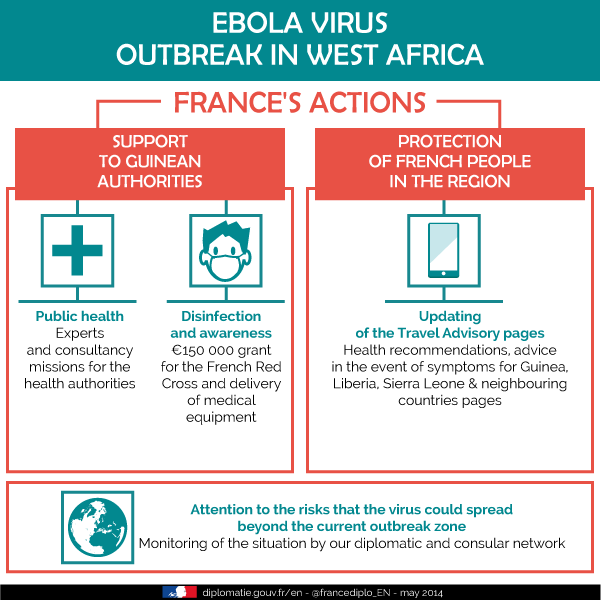 Support to the authorities of Guinea, Liberia and Sierra Leone

From the beginning of the epidemic hemorrhagic fever related to Ebola virus in Conakry, the Department of Foreign Affairs and International Development mobilized to support the Guinean authorities:

At the request of the Guinean authorities and with the support of the Crisis Centre of Expertise and consultancy, missions were established in the field of public health.

A grant of € 150,000 was paid to the French Red Cross to organize activities of disinfection, case tracking contacts and outreach to communities in the Forest Guinea, in support of the Guinean Red Cross.

Medical equipment was delivered in Guinea to assist in triage and improve case tracking contacts.

Our embassies in Guinea (also responsible for Sierra Leone) and Liberia are in constant contact with the structures of health monitoring and care put in place in each country.

We support the efforts of the WHO on the premises to coordinate additional resources that have been deployed and French teams were integrated with those of the international organization. For its part, the EU humanitarian agency ECHO has allocated 1.1 million euros.

The Institut Pasteur in Dakar also supports the detection capabilities and virus scanning, accompanied by a team of emergency cell of the Pasteur Institute of Paris biological response.

In Liberia, MSF has sent our request to a specialist team and set up an isolation center with kits to protect healthcare workers and to support teams of European experts already on the premises of Pasteur Institute. We pay tribute to all non-governmental organizations on the ground and in difficult conditions, doing a remarkable job.

Protection of the French community

The Department of Foreign Affairs and International Development is also mobilized to protect our compatriots in the region. By the end of March, plugs "Travel" from Guinea and Liberia and neighboring countries were updated: they now provide general information about the virus and return to a special page containing recommendations, as well as advice if symptoms.

Active monitoring of the diplomatic and consular network

We are vigilant about the risk of the virus spreading out of its current home. Our diplomatic and consular network has a very active standby and contacts are ongoing between the Ministry of Foreign Affairs and International Development, the health authorities, the Ministry of Social Affairs and Air France, which continues its regular rotations, from of Paris, in the region.