Home > News > Environmental and scientific news > Accompanied by a large delegation of senior...

Accompanied by a large delegation of senior...

Accompanied by a large delegation of senior officials from the Ministry of Foreign Affairs and International Development (MAEDI), the head of the Embassy’s Department of Cooperation and Cultural Action, researchers and the Representative of the Institute of Research for Development in Cameroon (IRD), the French Ambassador to Cameroon, Gilles Thibault, visited on May 14 research projects in the localities of Center and South regions of Cameroon. 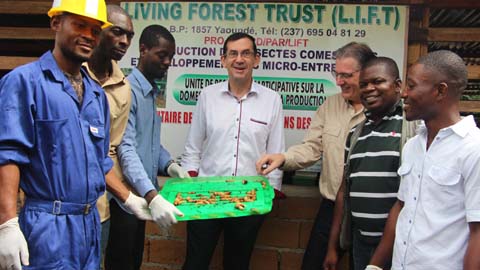 Edible insects are part of traditional foods in sub-Saharan Africa. The larvae of Rhynchophorus phoenicis (larvae of palm weevils) are harvested in Cameroon and are economically and nutritionally important. Traditional harvesting methods remain unproductive and limited in the dry season. They can lead to the massive destruction of Raphias palms. On the strength of these constants, the project to domesticate the larva of raffia weevil initiated participatory research and genetic studies to improve the species conducive to domestication. In addition, the project developed a breeding technique and trained peasants. To this end, an experimental farm was built in the village of Obout (Nyong-et-So’o Department in the Central Region).

Supported by the Debt and Development Contract (C2D) - Research Support Program (PAR), this project is implemented by the Ong Living Forest Trust (LIFT) with the scientific support of IRD researchers . 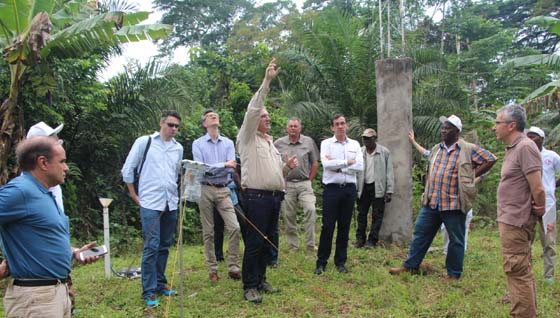 The Nyong Basin Observation Service is a multi-site research station that is part of the Watershed Research Networks (RBV) and the Critical Zone Exploration Network-> http: //www.czen. org /]. This project collects measurements and data to better understand the processes and transfer balances between different compartments of tropical ecosystems.

Initiated in 1993, the objective of this observatory is to study the mechanisms and the balance sheets of material transfers on the watersheds of the tropical zone, based on hydrological monitoring (rainfall, river flows) and hydrogeochemical (chemical composition of water) . In Cameroon, the study area consists of the Nyong basin, including the Nsimi-Zoétélé experimental catchment, representative of the relatively anthropized humid forest domain. The work is coordinated locally by Professor Jules-Remy Ndam, professor at the Department of Earth Sciences at the University of Yaounde I, in close collaboration with the partners of the Hydrological Research Center (CRH / IRGM).